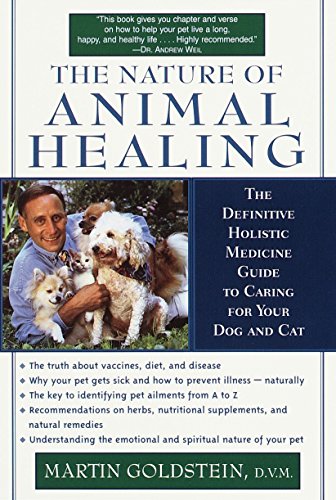 The Nature of Animal Healing : The Definitive Holistic Medicine Guide to Caring for Your Dog and Cat

Dr. Martin Goldstein\'s Smith Ridge Veterinary Center is in South Salem, New York. He received his D.V.M. from the Cornell University College of Veterinary Medicine. He has many cats and dogs, all of which are quite old and healthy.

Note: The hardcover edition of this book was written in 1999. The paperback was later published in 2000 with the same content. Hence, the copyright year is 1999 and the published date is June 6, 2000.

A pioneering revolutionary prescriptionfor the health and long life of your petsFor two decades, Dr. Martin Goldstein--America's most successful, renowned holistic veterinarian--has healed and helped his animal patients with the same natural therapies that benefit humans. The results have been so astounding that today critically sick pets are brought to him from across the country for a new chance at life and health.In this compelling, very accessible book, Dr. Goldstein explains exactly what holistic medicine is and how it works. By treating the root of a health problem instead of its symptoms, you too can help your animal to regain and maintain its own health, as nature intended. Dr. Goldstein also shares many remarkable true stories of supposedly terminally ill animals who have recovered to full wellness. Inside you'll discover- Why our animals get sick, even when we strive to give them the best of care- An exhaustive A to Z guide of pet ailments--and the best course of action- Why vaccines can do more harm than good- The link between diet and disease--and how the right diet can not only prevent disease but reverse it- How acupuncture, homeopathy, chiropractic, and other alternative options work--safely and painlessly--to restore true health- Specific guidance for the use of herbs, supplements, and natural remedies- The good news (and the bad) about cancer in animals--including extraordinary new treatments and potential cures- Coping with the inevitable death of your pet--both physically and psychologicallyAnd much, much morePLUS--the ultimate resource for holistic pet care: an extensive guide to holistic productmanufacturers and stores, books, newsletters, Web sites, veterinarians, and associations!