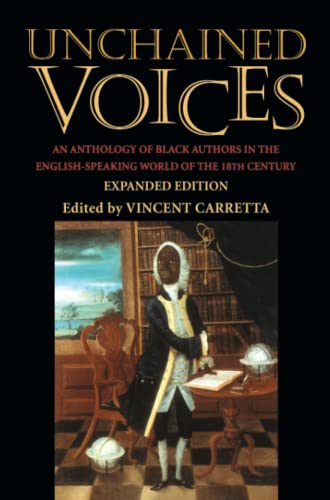 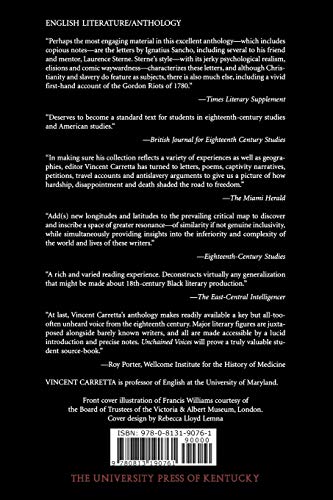 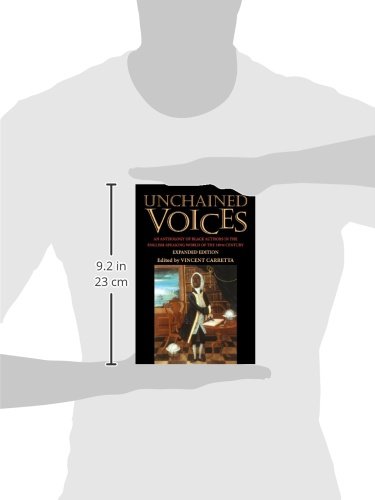 Unchained Voices: An Anthology of Black Authors in the English-Speaking World of the Eighteenth Century

Publisher: The University Press of Kentucky

In Unchained Voices, Vincent Carretta has assembled the most comprehensive anthology ever published of writings by eighteenth-century people of African descent, enabling many of these authors to be heard for the first time in two centuries.

Their writings reflect the surprisingly diverse experiences of blacks on both sides of the Atlantic-America, Britain, the West Indies, and Africa-between 1760 and 1798. Letters, poems, captivity narratives, petitions, criminal autobiographies,...

Vincent Carretta has assembled the most comprehensive anthology ever published of writings by eighteenth-century people of African descent, capturing the surprisingly diverse experiences of blacks on both sides of the Atlantic—America, Britain, the West Indies, and Africa—between 1760 and 1798.African American ReviewThis excellent anthology meets a longstanding need for a scholarly collection of early Anglo African and African American writers.

AcknowledgmentsIntroduction1A Note on the Texts and Editorial Policy17A Note on Money18Notes on the Illustrations19Narrative of the Uncommon Sufferings, and Surprizing Deliverance of Briton Hammon, A Negro Man20Poems: An Evening Thought26An Address to Miss Phillis Wheatly, Ethiopian Poetess26A Narrative of the Most Remarkable Particulars in the Life of James Albert Ukawsaw Gronniosaw, An African Prince, As related by Himself32Poems: An Elegiac Poem, on the Death of ... George Whitefield59Poems on Various Subjects, Religious and Moral59"To His Excellency General Washington"59"An Ode"72Letters of the Late Ignatius Sancho, an African, in Two Volumes. To Which are Prefixed, Memoirs of his Life77A Narrative of the Lord's wonderful Dealings with John Marrant, a Black110The Life and Confession of Johnson Green, Who Is to Be Executed this day, August 17th, 1786, for the Atrocious Crime of Burglary; Together with his Last and Dying Words134"Petition of an African Slave, to the Legislature of Massachusetts" (1782), from The American Museum, or Repository of Ancient and Modern Fugitive Pieces, Prose and Poetical. For June 1787142Thoughts and Sentiments on the Evil and Wicked Traffic of The Slavery and Commerce of the Human Species, Humbly Submitted to the Inhabitants of Great-Britain, By Ottobah Cugoano, a Native of Africa145The Interesting Narrative of the Life of Olaudah Equiano, or Gustavus Vassa, the African. Written by Himself185Copy of a Letter from Benjamin Banneker to the Secretary of State with his Answer319"An Account of several Baptist Churches, consisting chiefly of Negro Slaves: particularly of one of Kingston, in Jamaica; and another at Savannah in Georgia"325"An Account of the Life of Mr. David George, from Sierra Leone in Africa; given by himself in a Conversation with Brother Rippon of London, and Brother Pearce of Birmingham"333"Memoirs of the Life of Boston King, a Black Preacher. Written by Himself, during his Residence at Kingswood-School"351A Narrative of the Life and Adventures of Venture, a Native of Africa: But resident above sixty years in the United States of America. Related By Himself369App: Biographical Sketches389

\ African American ReviewThis excellent anthology meets a longstanding need for a scholarly collection of early Anglo African and African American writers.\ \ \ \ \ From the Publisher"An important work for gaining an understanding of a heretofore little examined aspect of the eighteenth century." -- Bloomsbury Review\ "The selection of texts is diverse and wide-ranging.... The most comprehensive anthology on the subject and deserves to become the standard text for students in eighteenth-century studies and American studies." -- British Journal for Eighteenth-Century Studies\ "Establishes the canon of Black diasporic authors writing in English in the 18th century and makes the texts accessible to scholars and students." -- East-Central Intelligencer\ "Carretta has done eighteenth-century studies an immeasurable service.... The definitive anthology of black writing of the eighteenth-century African diaspora, serving the purpose of both introduction to and contestation of the overlapping fields of American, British, religious, and African studies." -- Eighteenth-Century Fiction\ "Most challenging and exhaustive, both in quality and quantity of research, presentation, scope, and premise. Carretta seeks to validate what for him is an unbroken link of unshackled black literary voices." -- Eighteenth-Century Studies\ "This is the most comprehensive collection of writings by people of African descent on both sides of the Atlantic more than 200 years ago." -- Lexington Herald-Leader\ "An excellent anthology." -- Times Literary Supplement\ "Cause for celebration.... Will no doubt contribute to the ongoing rethinking of the eighteenth-century canon." -- Year's Work in English Studies\ \ \